It is believed, by the year 2,100, rising sea levels will consume the Maldives entirely. Without the land, the country cannot survive. This unique phenomena threatens an entire nation, an identity, and a 2,000 year old culture. Various options are being considered by the Maldivian government, who must make decisions now, that no other Maldivian generation has faced before; with the hope to geographically maintain their current position on the globe. This project, Swim or Sink, explores the design of a prototype that architecturally utilises a semi-submersible oil rig, in attempt to demonstrate the housing of Maldivian people and their associated culture. The project analyses the social, urban and cultural structures of the Maldives capital - Malé, (the largest city in the Maldives) in conjunction with the evaluation of the semi-submersible oil rig template and its relevant structural parameters. The fusing of these core elements suggests the plausibility of cultural continuity within the parameters defined by the oil rig. Ultimately preserving their geographical and cultural presence on the globe, in a fail-safe manner. This project provides a prototype that illustrates a way in which the people of the Maldives (who are threatened by rising sea levels), can be accommodated on semi-submersible oil rigs. As the reserach through design progressed, the acknowledgement of the Maldivian tradition and culture became extremely important. The research highlights the cultural attributes of which the final proposition is derived from. The generic semi-submersible oil rig template that was adopted for this thesis, was in attempt to demonstrate design moves that can be adapted to most semisubmersible oil rigs that currently exist today. Firstly, the social, urban and cultural structures of the Maldives were analysed and explored, followed by the analysis of the semi-submersible oil rig template and its associated structural parameters. The design challenge emerged in regards to fusing these ideas together; to sustain cultural continuity with the parameters defined by the oil rig. The initial design attempt revealed that the planning techniques used were incomprehensive, resulting in a sparsely arranged design. In addition, this eventuated in a considerably low number of people that could be accommodated on the oil rig; suggesting a non-feasible option. The design was further developed, achieving compactness in both planning and in three dimensional organization. Simultaneously, maintaining the required permeability to promote the oil rig to operate as a environmentally receptive organism, living, feeding and breathing off the surrounding oceanic environment. Thus, the developed design was densified, allowing for considerable increase in the number of people that can be accommodated on the oil rig to suggest further viability. To convey familiarity, the platform level plan (public realm), was derived from analysing the historical and formal attributes of a selected public centre of Malé (Maldives’ Capital). The organic figure - ground relationship that was discovered, provided a catalyst for the design of a spatial environment that was familiar to the Maldivians. The living quarters were designed to convey familiar enclosure ratios that were analysed in the streetscapes of Malé. The existing enclosure to open space ratios of the current Malé streetscape provided a framework from which familiar spatial volumes could be derived for the living quarters on the rig. The rise of modernity in the Maldives and in particular Malé, disconnected the current Maldivian society with traditional building materials that were once used for construction. The use of coconut timber that was a normality before modernism, is proposed as the main building material of the housing units on the oil rig, to reunite the people with this lost building tradition. This research does not take in to consideration the economical factors that are involved with such a proposition. The project positions itself that; one cannot put value on life. The Maldives require a fail-safe solution to maintain their geographical position on the globe, there are technologies (such as semi-submersible oil rigs) that already exist that have potential to relocating people and their culture. This project has exemplified the use of semi-submersible oil rigs to be worthy of architectural investigation. It has revealed that communities can be protected from the rising seas and tsunamis as a fail-safe enterprise. Additionally, allowing for specific design; aiding the preservation of a rich culture. Distinct similarities were discovered between the processes that currently occur in the Maldives, to the processes that are foreseen in the new floating community of the Maldives. 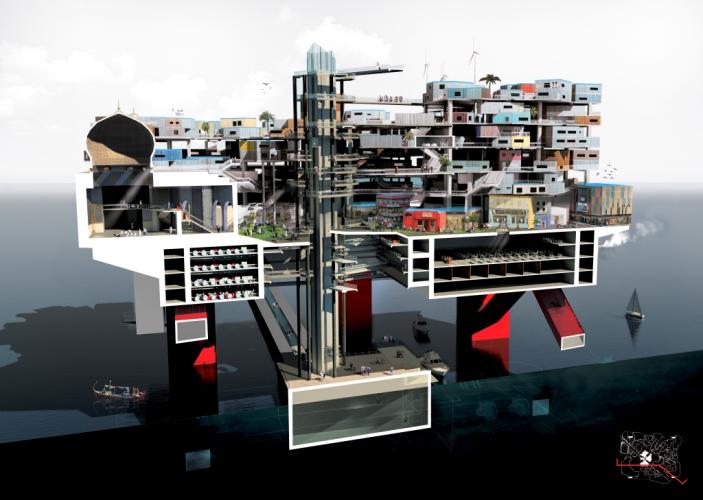 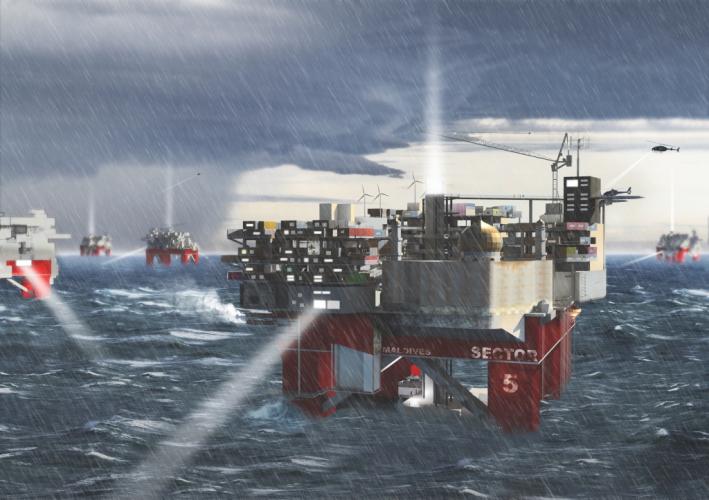 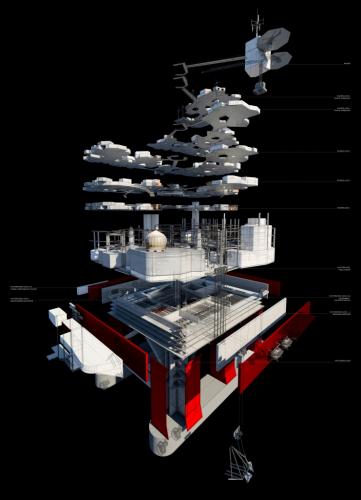 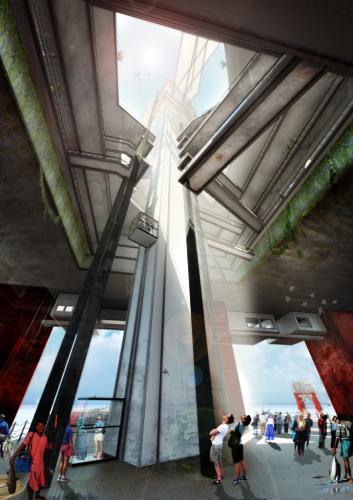 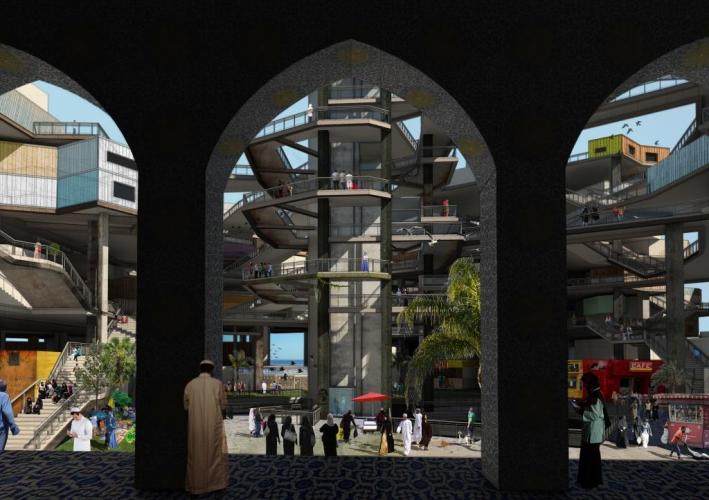 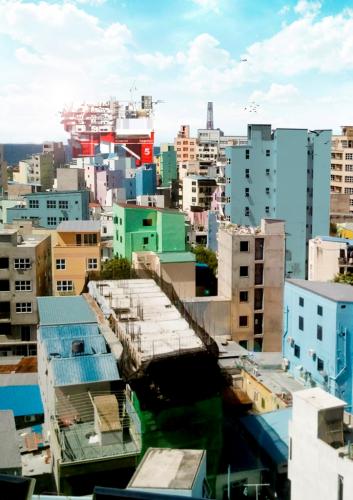 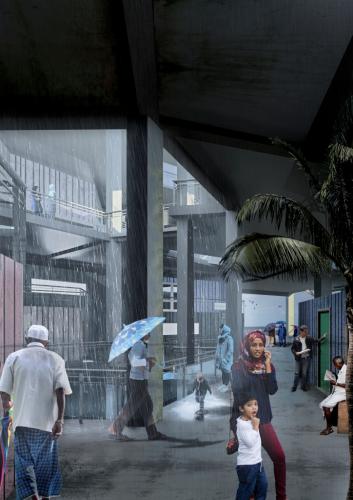 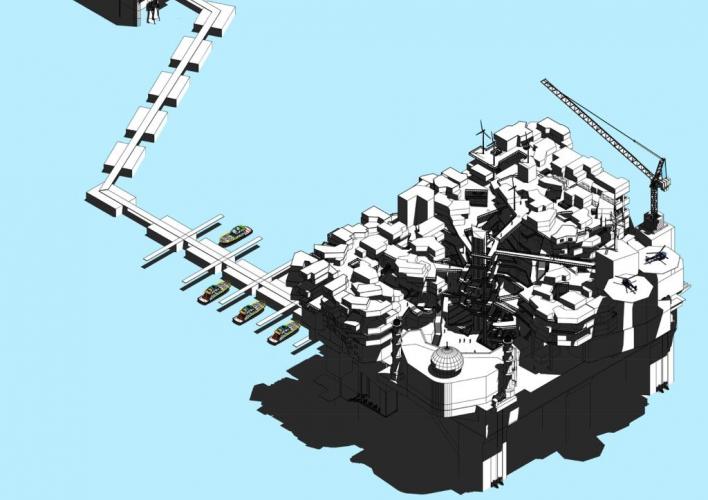 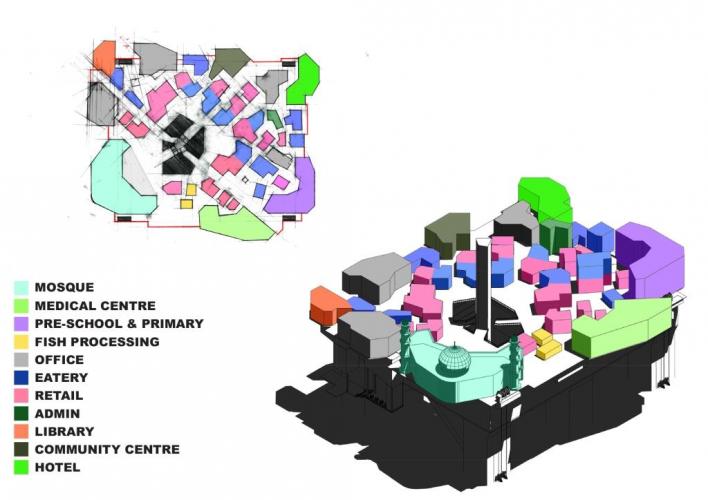